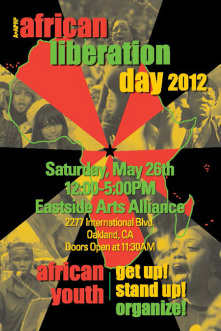 Comrades of the International Republican Socialist Network once again joined  with the All-African People's
Revolutionary Party and Pan-African Socialists  around the globe in commemorating this, the 54th celebration of African Liberation Day.

At a well attended event in Oakland, California, hosted by the A-APRP, IRSN Comrade Mary McIlroy spoke on the challenges confronting the present struggle in Ireland  for a 32-country socialist republic, with special emphasis on the role of youth in providing renewed vitality to that struggle. The comrades of the IRSN have participated in commemorating African Liberation Day every year since 1984--that is, 29 of the 54 years in which African Liberation Day has existed.

To supplement the remarks of Comrade McIlroy at today's commemoration, the International Republican Socialist Network released the following statement to Africans throughout the African continent and around the globe.

Sisters and Brothers, the comrades of the International Republican Socialist Network join you in celebrating the 54th observation of African Liberation Day. Yet, while we are joyous in commemorating this important anniversary marking the struggle to free the entire African continent under a system of Scientific Socialism, this year that joy is colored by the sadness we feel over the vicious imperialist assault on the Libyan Arab Jamahiriya, which left that beacon of  hope in darkness, as well as by the recent coups which toppled the governments of Mali and Guinea-Bissau. In Mali, we note that those who overthrew the government gave as their reason for seizing power that they wished to more agressively pursue the war against the National Movement for the Liberation of Azawad, who are dominated by the Tuareg, who have long suffered neglect and oppression in Mali, but also composed of Songhai, Peul and Moor people.

The the military forces of imperialism are again highly active on the  African continent, while its economic forces continue to rob Africa of its rich  inheritance of natural resources, fertile soil, and a large labor force. At the same time, the imperialist continue to make a mockery of the United Nations, by using its auspices to perpetuate the oppression of the African people of Haiti, by defending the continued rule of those who stole power from the mass democratic movement of the Haitian people.

More than half a century has passed since African Liberation Day was first commemorated, yet the necessity of Africans to reclaim their land and assert their independence from the machinations of foreign imperialists and domestic neo-colonialists. The way forward for those oppressed by colonialism and imperialism cannot help but be shaped by the the nature of that assault and the comrades of the International Republican Socialist Network recognize that while in Ireland, Scotland, Wales,
Euzkadi, Breizh, Catalonia, Puerto Rico, and Quebec liberation must come through a weaving together of the fight for socialism with the national liberation
struggle for independence, we also recognize that for Africa the way forward requires that the struggle for socialism there should be inter-woven with a transcendance of colonially-imposed national borders through Pan-Africanism.


Whether pursuing a strategy of struggling to weld together again the continent of Africa or seeking to gain national independence within the islands of Britain and Ireland, both struggle share the common thread of socialism and that bond unites us. Every victory by the Irish, Welsh, and Scots working class is a victory for the working people of Africa; every victory by the working class in Africa is a victory for the working people of the islands of Ireland and Britain. Likewise, every set-back suffered by one is a  set-back for the other. It is through our mutual solidarity that we preserve the strength to weather these set-backs and press ever forward towards our liberation.


In the spirit of that deeply held solidarity, the comrades of the IRSN join with the African revolutionary movement in commemorating African Liberation Day. We draw inspiration from the struggles of the African people and we draw strength from our friendship and comradeship with the sisters and brothers of the A-APRP. Forward ever, backward never!